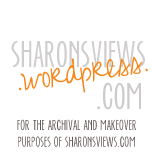 this is a temporary site while sharonsviews.com heads to the plastic surgeon for a makeover.

A THOUGHT ON BJU, HOPE, AND CHANGE 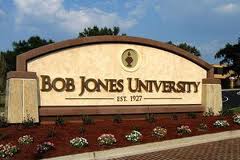 I’ve been a loyal alumna since 1981, done my bit of defending my school, stuck up for Dr. Bob (even Junior, in all his nonsense and rudeness: “So’s your little boy!”), and generally kept my head stuck as far down into the sand as was practical with a figure like mine. I’ve avoided the noise, excused the things I couldn’t avoid, blamed Mr. Peterman and thought bad thoughts about Dr. Lewis, even to composing a little song (you might know the tune if you’re carnal):

I wore black on red-balloon day, even though I rarely leave my house and live all the way out in California and I actually know gay people personally and have twice attended birthday parties for children who have two daddies. I toed the line.

After all, a girl—even someone as socially inert as I am—has friends, and I have some at BJU. Good friends with whom I laugh and cry. We pray for each other and each other’s marriages and children. We talk. We struggle. We mourn each other’s losses and cheer each other’s successes. We encourage and preach at each other. We hug across the miles. Some of them have been at BJU for decades. As my heart has been.

But then Joseph Bartosch happened, and my personal struggles with BJU and BJUP (that I’d blamed on myself—my inability to cope, my inappropriate expectations—You want us to sell your books? Wassamattayou? Didn’t you know writing books is your HOBBY?) popped out into the open without so much as a howdy-do. After decades of I’m-a-nice-alumna, I was suddenly slightly disaffected, sorta disgruntled, and a little bit mad. As days passed, the slightly-sorta-little bit part grew, and here we are.

In other places you can read about Dr. McCauley’s firing. (Pause for moment of stunned silence.) About which Stephen (PhD) (Liberal Studies), the University President, feels “helpless.” I wonder what Dr. McCauley (earned doctorate), beloved voice teacher and sometime Bottom-the-Ass, feels?

Other people are taking care of those things. What I want to talk about, in all my anger about these things that has bubbled over onto the surface of my life, is what I’d like to see changed. 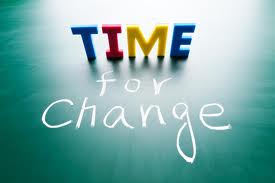 For the record, I’m nobody. I have no voice, no audience, and a tiny blog following. I am in leadership nowhere. I church hop as it pleases me. I am in law school, but I am not a lawyer and may never be one (There’s the little matter of the California Bar Exam and the Moral Character Investigation—what will they think when they see I graduated from the Hallowed Halls?).

Still, I have thought about this for a long time, so here are a few things I would like to see happen While There is Yet Time, because if what I’ve heard about Freshman enrollment is true, There Isn’t Much.

1. Change the name of the school immediately to South Carolina Christian College, unless you have at least ten substantial reasons to keep the word “University.” No one should go to a school named Bob.

2. Bring in a new President from outside. An earned doctorate from a well-known university or seminary is required. He or she must agree to take no salary unless and until enrollment begins to rise. At that time, the salary will kick in at an agreed-upon rate until reaching a reasonable level for a similarly-situated ministry. Naturally, health benefits and other perks will begin on Day One. (What is done with Stephen, I do not care. He can go on disability if he can’t work, which is what other people with PhDs in Liberal Studies probably do.)

3. Require the Board of Directors and the Board of Trustees to sign and then read aloud in chapel to be permanently posted on sermonaudio.com the following statement:

“I have never aligned myself with, nor prayed for the success of the Ku Klux Klan. I regret my racist past, if any, and pledge myself to furthering the mission of South Carolina Christian College by actively seeking out African-American, Asian-American, and Hispanic-American faculty and students.

“Furthermore, I regret the termination of aging faculty and pledge that this practice will no longer occur. I pledge to sell the art collection, back-campus housing, or other non-educational assets rather than to abandon those who have given their working lives to this school.

“I further pledge to speak out boldly against any past, present, or future corruption relating to the College—including sexual abuse or its cover-up—when I learn of it and without regard for my own or my colleagues’ personal interests.

“Furthermore, as much as it lies in me, I will attempt to avoid speaking evil of the President of the United States during his or her term in office, even if he or she is a Democrat, so help me God.”

Anyone who cannot sign and read aloud this statement into the record shall not be retained on the Board. No leeway shall be given to veterinarians whose sons work at the Statehouse.

4. Vespers shall be held twice a semester on Thursday evenings. Attendance at either of these will fulfill a student’s vespers requirement (if any) for the semester.

5. Non-mandatory praise-and-worship services, led by a “Northland Style” worship band will be available for students to attend in the Amphitorium one night per semester. Attendance will not be taken. Hands may be raised in praise to Jesus. Tears of joy permitted. Speaking in tongues remains an expulsion offense, so students fearing the moving of the Spirit should sit out of earshot of others. Overflow seating in Rodeheaver with video link. Chaperones to be brought in from North Hills if there are insufficient faculty willing to attend.

6. Speaking of Jesus, it will be mandatory for Chapel Speakers to use His Name at least as often as the words homosexuality, bestiality, and pedophilia are used. A chart will be compiled by visiting Alumni Overseers.

7. Rants against homosexual students will end. Charts will be kept by the Alumni Overseers.

8. The Alumni Overseers will be a rotating body of volunteer alumni not currently employed by South Carolina Christian College. They will be conspicuous by their attire or an identifying badge. In addition to their keeping charts on chapel messages, they will accept signed and anonymous messages from students on any topic whatever. They will not report to anyone. Students do take the risk, when passing messages to the AOs that memes might be made about them. However, all memes will be kept in good humor and without names. Urgent messages will be passed to appropriate law enforcement. Confidential messages regarding the following (and related) will be kept confidential and students will be steered to appropriate, loving resources:

8. In the interest of academic and political freedom, a Young Democrats club will be formed for those who need an outlet for their rebellion as well as for the poli-curious and incoming minority students (see Board oath, above). No one will be penalized, snubbed, or shunned for joining or attending this club, which will meet on the First Tuesday after the First Monday of every month (because it just makes sense) in an easily-accessible campus room. (That is, not the Rupp Room.) Republican students who “crash” the meeting may not “report” anyone for making fun of Rush Limbaugh or Sarah Palin. (On other Tuesdays, the campus “Birther” club will meet in Lecture A. Kenyan coffee served by genuine Timothy-student Kikuyu.)

9. The following nonsense will end: characterization of Reformed thought as “unbiblical.” If possible, lure Dr. Michael P.V. Barrett back from parts unknown so that people will enjoy Bible class again and Sandra can be near her grandchildren. Ignore Dr. Barrett’s characterization of students as “idiots” in the interest of fascinating Reformed, if premillennial, teaching.

10. A serious effort to recruit black faculty will begin immediately. There are a number of doctorally-prepared black Reformed pastors around. Start with Dr. Reddit Andrews and move on from there.

12. Acknowledge that pants are not a privilege, and front campus is not a place for figure-flattering hosiery choices.

12. Bring back Dr. McCauley. Apologize to Dr. McCauley. Promote Dr. McCauley to Chief Brand Officer, although it must be admitted that his wife is a bit young for him too.

13. Shut down the impractical and non-profitable extra “ministries.” Stop with the China School. Our enrollment is dwindling. Our demographic is shrinking. We need to expand our ministry by opening up the music and shutting down the hateful nonsense that mental illness is fake and rape victims who talk about it are psycho.

20 comments on “A THOUGHT ON BJU, HOPE, AND CHANGE”

This entry was posted on April 16, 2013 by sharonsviews in Alma Maters.